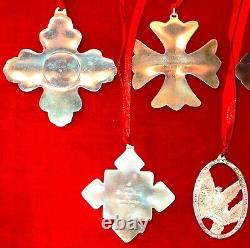 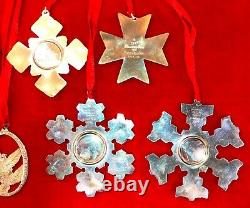 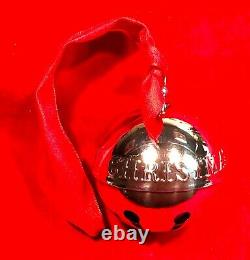 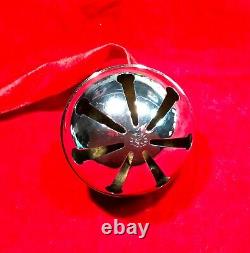 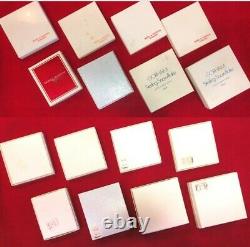 Here is the second in the series of annual Christmas Crosses in richly detailed sterling silver by Reed & Barton. The 1972 Christmas Cross - a limited edition - is an authentic reproduction of an antique Processional Cross that has been traced back to the 6th Century in the Byzantine period. Then, the artists of Byzantium were noted for their magnificent jewel-like elaborations upon classic forms, such as this gracefully modified quatrefoil.

Original Box, Original Anti-Tarnish Pouch, and Original Red Ribbon included. This richly detailed sterling silver original - a Limited Edition steeped in historic tradition - may be worn as a pendant or used as a charming ornament to enhance your Christmas tree, wreath or window. Heirloom Quality Sterling Silver, NOT silver plated and crafted in USA. Created by the master silversmiths of Reed & Barton, founded in 1824 in Taunton, Massachusetts and one of the largest and most famous silver companies in the world.. Creating innumerable beautiful silver, sterling silver and silver plated items.

Chester cathedral was built in the 15th and 16th centuries by Kings Henry the Vii and VIII, an era recognized as the supreme period of English church woodwork. Original Box, Original Anti-Tarnish Pouch, Original Red Ribbon and COA included.

Seventh in a distinguished series of annual crosses based on authentic originals and artistic significance, Reed & Barton's 1977 sterling silver Christmas Cross is a stylized reproduction of the eight-pointed cross worn by the "Knights Hospitallers", the 11th century religious order of Chivalry. The "Knights Hospitallers", or the "Order of Malta" as they were later called, were composed of Knights of noble descent, who later provided hospital service to the needy during the 12th century Crusades. These Knights of the Order of Malta wore an eight-pointed white Cross on a black cloak to distinguish and neutralize themselves from the warring factions. The raised spiral ornaments on the 1977 Cross were inspired by the ancient neolithic stone carving from the temple of Hal Tarxian on the island of Malta.

Original Box, Original Plastic Bag, Original Red Ribbon and COA included. At the end of the 1977 production run, the dies used to manufacture this cross were destroyed, thus assuring the owner of a valued collector's item. 1979, 19.9 grams, 2.75" X 2.75". This is the 9th in a distinguished series of annual sterling silver Christmas Crosses and is based on Authentic originals of historic and artistic significance. The 1979 Reed and Barton Christmas Cross was inspired by the 14th century decorative encaustic tile which came from a cathedral altar in northern England.

Derived from the Greek word for "burnt in", the word encaustic refers to an ancient method of painting with hot colored wax. This hot wax technique was first developed by the Greeks to protect their statues from the elements. The Romans and Egyyptians further advanced the technique of encaustic painting to the point where the wax like substance was so durable it was widely used as a form of artistic expression as well as surface protection for painting. This English encaustic tile, now in a private collection, is one of the last remaining examples of this ancient art form.

Gorham's renowned excellence in silver made the 1976 collectable Sterling Silver Snowflake a stunning keepsake. Gorham Sterling Silver Ornaments have become some of the most popular of all in America and around the world.

It has been one of the most cherished and sought after high quality sterling brands worldwide. The White House has used Gorham sterling silver services during many administrations. Grant asked Gorham to commemorate the country's one-hundredth anniversary with a spectacular Century Vase. 1977, 21.9 grams, 3.5" X 3.5".

Gorham's renowned excellence in silver made the 1977 collectable Sterling Silver Snowflake a stunning keepsake. 1975 marked the sixth edition of the 51 Gorham Sterling Snowflakes created as of 2020.

As the needs of our Clients ebb & flow! Please check our'View Items For Sale' often; thanks! We WILL make it right for you. If we make an error in the listing or a mistake in the photo or scan.

We ask that you take the responsibility for reading and understanding our terms and. And, as always, thanks for stopping by. This item is in the category "Collectibles\Holiday & Seasonal\Ornaments".

The seller is "realestatehousehunter" and is located in this country: US. This item can be shipped to United States.